*Amenities may not be combinable with all fares shown. Additional restrictions may apply.

Have It All Package Available for Purchase – Includes Shore Excursion(s), Drink Package, Specialty Dining and Wi-Fi

Save on Sunshine - Cruise Fare Savings

Civitavecchia is the port city for Rome. Rome has always been and remains the Eternal City. With its splendid churches, ancient monuments and palaces, spacious parks, tree-lined boulevards, fountains, outdoor cafés and elegant shops, Rome is one of the world’s most attractive cities. Among the most famous monuments is the Colosseum where spectators watched combats between muscled gladiators and ferocious animals. Stop to see the remains of the Forum, once a political and commercial center. Rome’s squares were enhanced with such imposing structures as the Vittorio Emanuele Monument and grandiose fountains like the Fontana di Trevi. Awe at Christendom’s most magnificent church, the Sistine Chapel. The busy square Piazza Venezia is easily recognized by its imposing Vittorio Emanuele II Monument. Take a stroll to Rome's famous Trevi Fountain. Vatican City is the site of lovely St. Peter's Square and St. Peter's Basilica, where for 200 years, Renaissance masters worked on its design and created an unparalleled masterpiece. Visit Vatican Museum.

Painting with Caravaggio for Kids

Alicante is located on Spain’s Costa Blanca in the Levant Region, along the country’s southeastern coast and is a tourist resort and commercial port. The region is marked by lush mountain ranges. During the Gothic era of the fifteenth through sixteenth centuries centuries, art and architecture flourished in Alicante and the remainder of the Levant Region. Immense palaces and grandiose churches were built with elaborate baroque details. Visitors can see a third century BC fortress - the citadel of Santa Bárbara built by ruler Amilcar Barca, a Carthaginian, Arrabal Roig - the old quarter, the Baroque town hall (1701-60), the Church of Santa María (14th century), and the Renaissance church of San Nicolás de Bari (18th century).

Malaga is a popular holiday destination - known as the birthplace of Picasso and for sweet Malaga dessert wines from vineyards outside of town. Points of interest include impressive Gothic architecture, remains of a Moorish castle and interesting museums. Malaga is a popular starting point for trips to Granada and resorts along Costa del Sol. Splendid Granada and famed Alhambra are the region’s most outstanding attractions. Magnificent Moorish palaces and fortifications contrast sharply with Christian churches from Spain’s 1492 Reconquest era. Ronda's incredible location affording spectacular views over the valley and distant hills. Malaga Fine Arts Museum holds works by Spanish artists of the 16th to 20th centuries and by artists from Malaga, including Picasso. Marbella, which has been favored by the rich and famous, is a very popular holiday and yachting resort destination. One of the first resorts of the Costa del Sol, Torremolinos has luxury hotels, busy plazas and shopping streets, a lively art scene, a Wax Museum created by Madame Tussaud, and a glitzy casino.

Cadiz is an old city with Andalusian character. The magnificent Baroque cathedral and impressive mansions were built with gold. Cadiz’s modern-day treasure lies 30 minutes to the north in the rolling hills of Jerez - where production of the liquid gold, as the famous sherry is often called, ensures a booming economy. Visit one of the bodegas for a tour and tasting. The Historic City Center of Old Cadiz is a pedestrian zone for a pleasant stroll. The monument to "Las Cortes" is the Spanish Parliament established in Plaza de España. The 18th-century golden-domed Cathedral of Santa Cruz looms over the whitewashed houses. The dazzling interior contains a magnificent collection of sculptures and art objects. The Museum of History features an outstanding model of Cadiz in ivory and mahogany that illustrates what the town looked like at the end of the 18th century. The small, colorful Flower Market offers much local flavor. The Moorish-style Alameda Apodaca Gardens serve as a reminder of the Moors’ occupation in past centuries.

Madeira has been described as "Island of Eternal Spring". It is renowned for its wine, which many feel ranks among the world’s best. Funchal has a wide selection of resort hotels where watersports, golf and tennis are popular. Visitors can tour the 15th-century cathedral, orchid gardens of Quinta das Cruzes, and buildings associated with Christopher Columbus. Madeira’s discoverer, Zarco, is believed to have lived in the house Quinta das Cruzes. Now it displays furniture and paintings and is surrounded by fabulous gardens. The stunning 15th-century design of Sé Cathedral features white stucco with contrasting black basalt and red tufa rock; the ceiling is inlaid with ivory. Located near Town Hall, the Museum of Sacred Art contains art from several islands, including a group of 15th- and 16th-century paintings of Portuguese and Flemish schools. Visit colorful Mercado dos Lavradores during the morning to see flower vendors and fish and produce stands.

Originally a fort built by the U.S. Army in 1838, during the Second Seminole War, Ft. Lauderdale has little left of its warlike past. Instead the city welcomes visitors with broad beaches and an easy pace of life, plus convenient air and water connections that make the city a perfect place to visit. 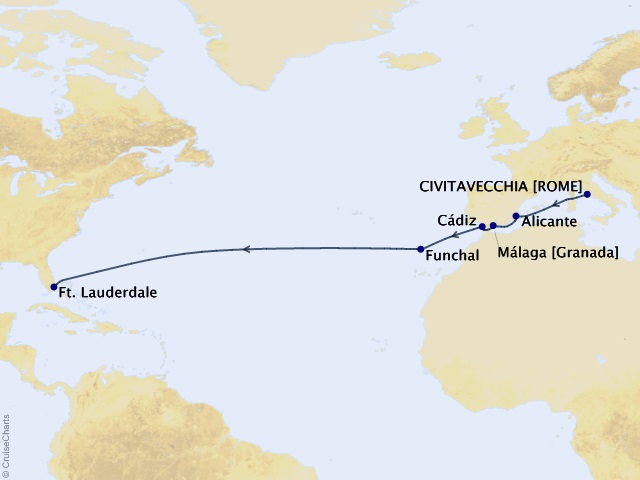 Rates are cruise only, per person, based on double occupancy. Taxes, Fees and Port Expenses of $140 additional for all guests. Fuel surcharges may apply. Please ask your travel counselor for details. Rates are subject to availability and may change without notice. Restrictions may apply.

All fares are quoted in US Dollars.

All prices per person and in USD unless otherwise stated.
Offer ID:
1407909