Note: Amenities may not be combinable with fares shown. Additional restrictions apply.

Cairns is the sunny garden city where the Great Barrier Reef meets the Wet Tropics Rainforest, mountains and the gulf savannah not too far away. The city's water front boasts a world class marina and wharf used by visiting cruise liners, yachts and tour vessels. Cairns is situated in the Northern end of Tropical Queensland Australia. It's a modern city with a good location to explore some of Australia's vast array of flora and fauna. With a magnificent Casino, Cairns is alive with more activities than a visitor will ever have time for. The principal attraction is the over 60 national parks from the wet tropical rain forests and lush tablelands to the truly wild Cape York Peninsula and the Great Barrier Reef.

Noumea, New Caledonia's capital, is a city of French culture often referred to as St-Tropez of the Pacific. Noumea is a pretty city with sidewalk cafes and little bistros resembling a French provincial town. Arriving in Noumea creates a feeling of being in a France while native Kanak people dress in colorful ankle-length dresses and fish the reef with spears for the evening’s meal. Not far off the coast, the longest barrier reef in the world shelters 350 species of coral and 1,500 species of fish. It looks its best from November through January when the Poincianas, or flame trees, turn red. Sights to see include Place des Cocotiers, St. Joseph's Cathedral, Aquarium, and Botanical Garden and Zoo. 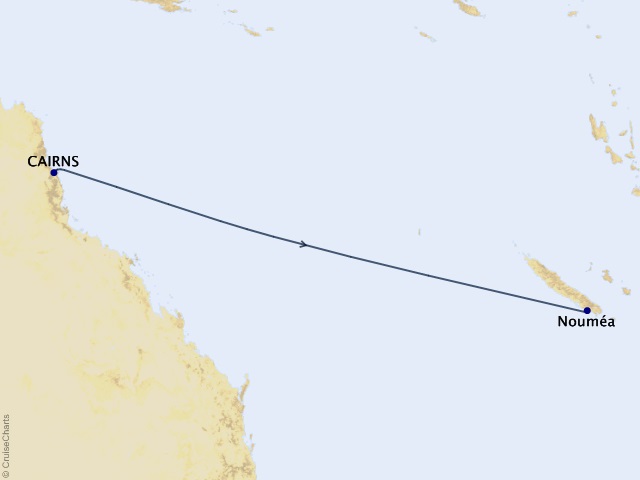 Prices include non-commissionable fares. Government fees/taxes of $280, transfers, and airfare (unless otherwise stated) additional for all guests.

All fares are quoted in US Dollars.

All prices per person and in USD unless otherwise stated.
Offer ID:
1394840