With a great historic past and incomparable art treasures, Venice is renowned as one of the world’s great cities. Its 118 islands are separated by more than 150 canals and spanned by 400 bridges. During Venice's artistic golden age many magnificent structures were erected to create world-famous masterpieces. One of the best sightseeing routes is along Grand Canal, with many palaces lining the famous waterway. St. Mark’s Square offers access to some of Venice’s most famed attractions - St. Mark’s Basilica and Doge’s Palace. From Piazza San Marco, a maze of narrow streets are lined with shops, cafés and restaurants. A popular pastime is sitting at an outdoor café facing the square while people-watching and letting the whole marvelous scenario unfold. Venice’s Murano, Burano and Torcello Islands comprise an area famous as home of Venice’s glass-blowing industry and known for their charm, skilled lace-making and medieval monuments. Relax on a gondola ride, see art treasures in museums, churches and palaces, and have a sumptuous meal - all in this incomparable city.

As the Kvarner Riviera's biggest city, Rijeka has a vibrant nightlife and is a hub of industrial trade and more of a springboard from where to depart to other scenic towns along the coastline. Stroll the Korzo, a pedestrian street lined with restaurants and shops. View the City Tower, built between the 16th and 19th centuries and decorated by four clocks crafted in the 18th century. The Roman Arch, once part of a fortress and possibly connected to the rule of Emperor Claudius II, and the Church of St. Vitus (13th century) both give a look into Rijeka's past. Legend says  that the medieval cross found within St. Vitus once lead to a man being consumed by the earth, after he had thrown a rock at the crucifix. Rijeka's history is varied and stems from its ancient role as an Illyrian settlement in the 2nd century BCE, when it was part of the Roman Empire. It went through numerous rulers and kingdoms over the centuries, from the medieval Croatian Kingdom to the Hapsburg Empire, from the Austro-Hungarians to being annexed by Mussolini. Having not been a free city since the 17th century, in 1947 Rijeka was finally part of Croatia in Yugoslavia. Experience 19th century architecture at the Ivan Zajc National Theatre, where you can still enjoy performances. Museums, galleries, fine dining and more make exploring the city an interesting way to spend thet afternoon, or you can hop on a bus to go further down the coast to Bivio to enjoy the beach and seaside strolling.

Split, the largest Croatian city on the Adriatic coast, is the heart of Dalmatia. The old town is built around the harbor on the south side of a high peninsula sheltered from the open sea by many islands. Split achieved fame when the Roman emperor Diocletian (245-313), noted for his persecution of early Christians, had his retirement palace built here from 295 to 305. Since 1945 Split has grown into a major industrial city with large apartment-block housing areas. Much of old Split remains, however, and this combined with its exuberant nature makes it one of the most fascinating cities in Europe.

Sightseeing of Split and Trogir

Santorini is everything that has made the Greek islands legendary. The world famous island of Santorini is the southern most island of the Cycladic group in the Aegean Sea, and is located north of Crete. Its population is distributed among thirteen villages and just exceeds nine thousand. The marvelous dry climate and unbroken sunshine create year around conditions which are perfect for observation, photographs and videos under an extraordinary variety of natural lights and colors.

Mykonos's many captivating attributes make it one of the most celebrated Greek holiday islands. Its main village is a colorful maze of narrow streets lined with white-washed houses, many with bright blue doors and shutters. As an attractive backdrop, famous windmills are lined up like toy soldiers on the hillside, vestiges of a time when wind power was used to grind grain. Mykonos has churches and chapels scattered about the island; quite a number of them are located right in town. Radiant flowers spill over white-washed walls and shady courtyards. In addition to swimming, sunning, water-skiing and surfing, visitors find endless shopping opportunities. Artists have relied on Mykonos' beautiful setting to inspire them. The most photographed site is the Paraportiani, a cluster of white-washed churches resting below windmills. Mykonos's museums include an Archaeological Museum, which houses relics from the Trojan War, a Folk Art Museum and a Maritime Museum. The best beaches are Aghios Stephanos, Psarou, Kalafatis, Onros, Panormos and Elia.

Piraeus is the seaport for Athens, the capital of western civilization, which boasts a fantastic mix of classical ruins and vivacious modern life. Climb the hill of Acropolis to wonder at the Parthenon, join the lively Athenians in Constitution Square, and find a welcoming taverna for spirited bizouki music, plenty of ouzo to drink, and energetic Greek dancing. Piraeus is the largest harbor in the country. The white chapel of St. George at its summit has a theater bearing the same name. The hill of Nymphs is the site of a planetarium, which is located above magnificent Thesseio temple. Among all of these hills, Acropolis is the one that glorified Athens and the whole Greek world and became the symbol of the western civilization. Bays and small rocky or sandy coves dot the area and during the summer are filled with Athenians and foreigners enjoying their beauty.

Athens at a Glance - 3 hours

Athens - The Athenian Riviera & the Temple of Poseidon - 4 hours

Destroyed several times by eruptions from Mt Etna and an earthquake in 1693, this busy port, situated along the northeast coast of Sicily, on the Gulf of Catania, is now graced by wide boulevards, lush parks and spacious piazzas. Choose from the medieval power of the 11th-century cathedral and the Castello Ursino, the Baroque fantasy of San Nicolo, or return to the ancient origins of the city with a visit to the Greek theater. Just a short drive up the coast are the Greek glories of Taormina, with unforgettable views of Mt. Etna.

Valletta is the capital of Malta. This remarkable fortified city with its massive bastions followed the most advanced Renaissance ideas in town planning, with streets laid straight on a grid looking over the Grand Harbour. Outside the 'City Gate' is the famous Triton Fountain. 'City Gate' has public buses and vendors selling soft drinks and all sorts of traditional fresh Maltese bread and sweets. Freedom Square shows an extraordinary capital with buildings of fine architecture of different tastes and styles ranging from the Mannerism to Baroque to Rococo to Neoclassicism. Valletta is a fascinating city for wandering around looking at what used to be the Knight's own cathedrals and Auberges. The city's backbone is Republic Street, which runs straight through the city center to Fort St. Elmo. Valletta has several narrow, steep side streets decorated with traditional Maltese pastel colored balconies and a statue on almost every street corner. There are plenty of shops, cafes, and restaurants to choose from.

Barcelona, the self-confident and progressive capital of Spain, is a tremendous place to be. Though it boasts outstanding Gothic and Art Nouveau buildings, and some great museums – most notably those dedicated to Picasso and Catalan art – it is above all a place where there's enjoyment simply in walking the streets, stopping in at bars and cafés, drinking in the atmosphere. A thriving port and the most prosperous commercial centre in Spain, it has a sophistication and cultural dynamism way ahead of the rest of the country. In part this reflects the city's proximity to France, whose influence is apparent in the elegant boulevards and imaginative cooking. But Barcelona has also evolved an individual and eclectic cultural identity, most perfectly and eccentrically expressed in the architecture of Antoni Gaudí. Scattered as Barcelona's main sights may be, the greatest concentration of interest is around the old town (La Ciutat Vella). These cramped streets above the harbor are easily manageable, and far more enjoyable, on foot. Start, as everyone else does, with the Ramblas.

Barcelona: Walking Tour of the Gothic and Jewish Quarters

Barcelona: Tour of the Gaudi Houses 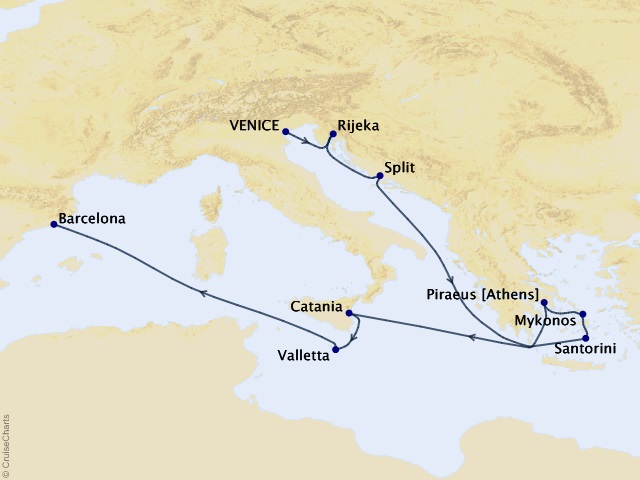 Rates are cruise only, per person, based on double occupancy. Taxes, Fees and Port Expenses of $155.08 additional for all guests. Rates are subject to availability and may change without notice. Restrictions may apply.

Departure Date:
8/9/2021
Number of Nights
11
Cruise Inclusions:
Available Addons:
Optional roundtrip airfare from your city
Optional shore excursions
Remarks:
Prices are per person, based on double occupancy. Airfare, Taxes, Fees and Port Expenses are additional for all guests. Pricing for 3rd and 4th guests are available upon request and are subject to stateroom category availability. Prices change frequently

All prices per person and in USD unless otherwise stated.
Offer ID:
1370518

Enter for a chance to Win a Free Vacation — Click Here!